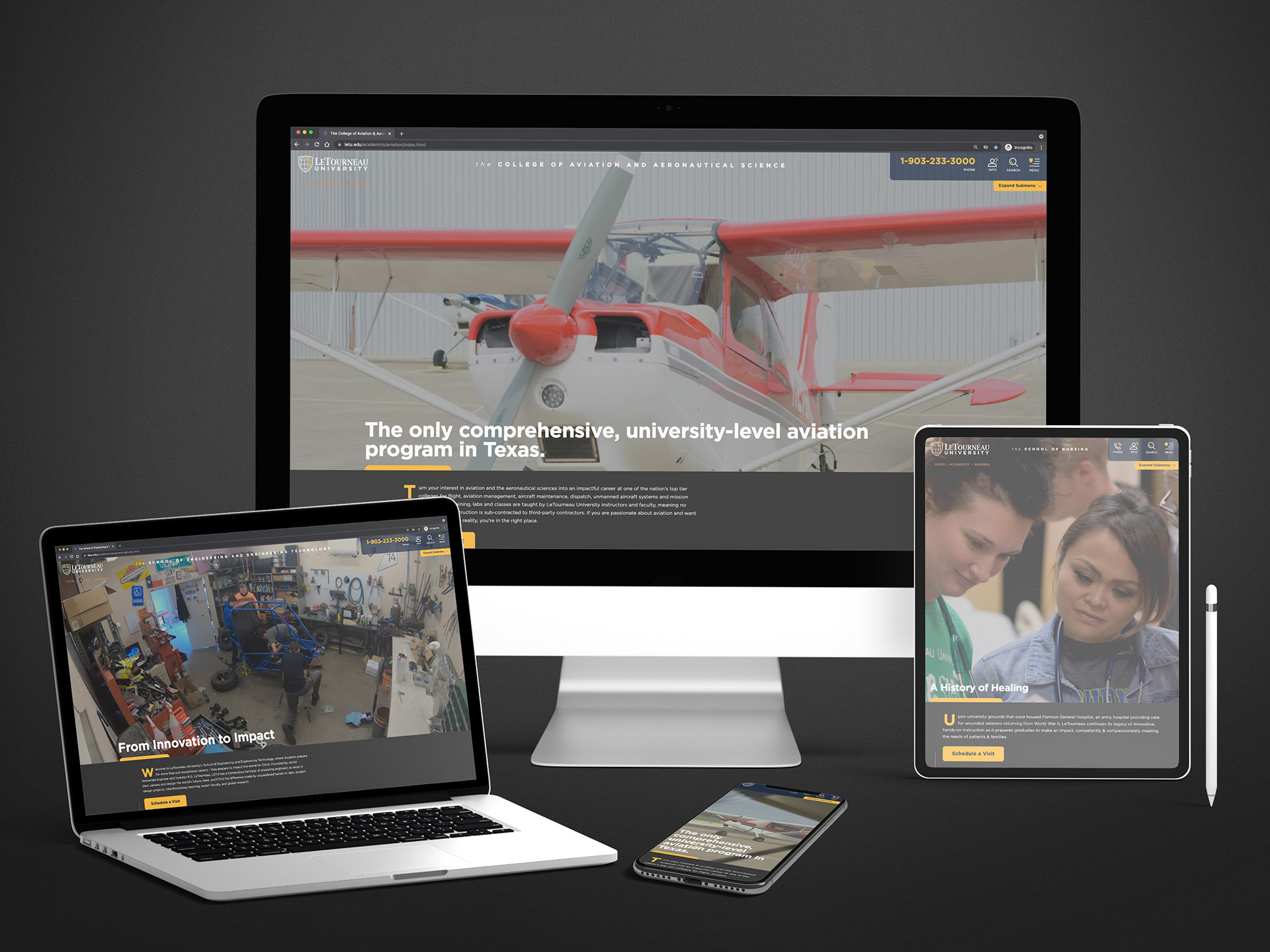 It was time….way past time. Though I had only been a part of LeTourneau University’s Marketing and Communications team for about 2 years, it hadn’t taken long for me to become familiar with everyone’s weariness from the bloated, cumbersome and extremely dated website that had been in place for the past 15+ years.

Visually, the website was extremely sterile, lacking imagination and identity. The fonts came in all types, sizes and colors. There was entirely too much text presented too soon for site visitors. The Photography felt underwhelming, and even the color blue just felt old. Even for a STEM school, there was not nearly enough design and flare present.

Stucturally, there were even more issues. There was a crowded, catch-all menu headlining every page that held anything that anyone of importance had successfully made a case for why it should be there. There were lists and links and more lists and more links that existed just to say the were there. There was no real hierarchy to help you understand any page’s level of importance. To top it off, there was the bureaucracy associated with any institution of higher learning and organizational decisions that had to be made. As the saying goes, “form follows function,” and many functions were either broken or unestablished.

So the LeTourneau University Website became the university’s leading effort to catalyze solutions on multiple front. Before our team could devote any time to the outdated form of the old website, we had to respectfully address the problems with many of the functions, and that would take time.

Several preliminary discussions were necessary in order to make some early, important decisions. For our marketing and communications team of 9, the bulk of the workload would fall on me, the only graphic designer and Mark, a colleague with great skills and background in web development. Most everyone else would help with deciding and inputting content. We weighed the costs and benefits of tackling this project in-house versus hiring a design firm, and Mark and I decided we were up for the challenge. Among several other benefits, we were able to create a bespoke website, tailored to our identity as “The Christian Polytechnic University”; we sped up the process by eliminating the need for a design agency—middle-man—to create something that would work within our chosen content management system, which was also new; last, but certainly not least, designing the website in-house undoubtedly saved our university more than $250,000. After getting approval from several layers of authority, we were off./h2

The task ahead was daunting but I was up for the challenge. The website design of the website needed to solve as many of the aforementioned problems as possible while satisfying a local and alumni community numbering in the tens of thousands. How do you take so much information and condense it into a practical, digestible, aesthetically-pleasing package? The first thing I did was create some basic design mockups within photoshop.

Various pages within the website held different levels of importance, and I wanted those differences to bo felt, providing certain visual cues to subconsciously inform site visitors. After considering the breadth of content that would be featured, and accounting for future growth, I came up with a modular system to accommodate the variety. The site templates would be generated for the largest subsets of content. The home page would stand on its own, followed by academic landing pages for the different colleges and major departments, and finally there would be an article page designed to hold information, accessible after about 3 clicks or a direct link.

Then, within each of those templates, pre-designed modules could be activated or inactivated to present content when and where it was needed. For Instance, the article page would consist of a hero image or background video, a title bar with a submenu to include important areas within each department and a main content area comprised of 3 vertical sections. The only constant would be the main, center article section, and the left and right columns could be activated when necessary. Nearly every page was built this way, and the months ahead would prove that decision to be a wise one.

Overall, I was very proud of the final product which ended up winning several awards, and long after completion, our team still considers the project one of our proudest moments. It solved so many problems and made information accessible to prospective students and campus partners in a modern, responsive package. In a time where so many turn-key solutions exist, it was quite the accomplishment to build a website from ground-up. It was—and still is—something we can call our own for years to come….but hopefully not 15+